At the beginning of 2015, I joined a rather interesting Flickr group – 12 Months of the Same Image. As the group admin describes it “The challenge here is for you to find a subject of your choice and then photograph it from the same position roughly on the same day of each month over the next 12 months. Then we can all compare how the subject alters over the course of a year.” A fantastic challenge, I thought. There aren’t many members in the group, but they are all interesting photographers, taking their photos in interesting places, and they are all jolly nice people to boot.

I mused for a week or two on just what I was going to photograph for this challenge. Steve and I travel around Wiltshire a fair bit every weekend. An awful lot of the time, we head southwards to Salisbury Plain; sometimes it’s the west that beckons and we make for the Avebury area. Sometimes the pull of scarily-muddy, scarily-steep byways is too much for Steve to resist, and it’s off to the north we go, to explore around Liddington and Barbury Castles. We’ve even been known to venture to the east, and go on photographic excursions in darkest West Berkshire or even Hampshire!!

In the end, I chose a spot which isn’t actually that far from home … despite the fact that we do travel to many different parts of Wiltshire, we do also spend a lot of time travelling the byways and backroads of our very local area! I had stopped one morning last January, on my way to work, because the sunrise and the frost on the fields were just too gorgeous to resist, and I wanted to take a few photographs. One of the (many, not few) photos I took that day became Image #1 in my 12 Images series …. 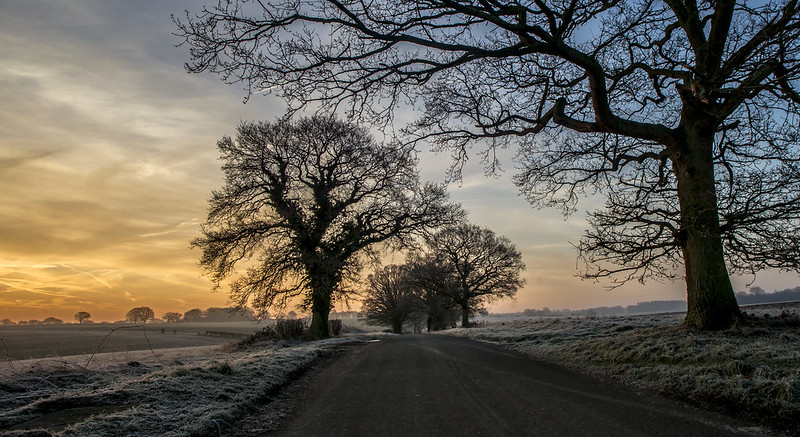 I decided to use this particular image as my first entry in the group, partly because of the fact that it is a road that’s close to home and is on my route to work, so I knew it was going to be easy for me to get the required shot each month. But mainly, I chose this particular shot, because this road to Chisbury is such a beautiful place! The fields on either side of the road change throughout the year, as the farmer plants and reaps his crops. And these oak trees, which line the route, look just beautiful … especially when the jays are flitting between them, collecting acorns!! I love taking photographs here, so I knew it was going to be fun, recording how this scene changed with the seasons. This photo, for me, IS winter in Wiltshire!

2015 was rather a “grey” year. The winter was not that harsh, nor that cold; it was simply rather dull and grey. The transition from winter to spring was seamless – cold and grey days lengthened into slightly warmer grey days – but suddenly, in May, it was as if, finally, spring was here! The leaves were green, the sky was blue and the hedgerows had burst into flower. This shot, taken very early one morning, made me think that a summer of long, hot days was on its way …. 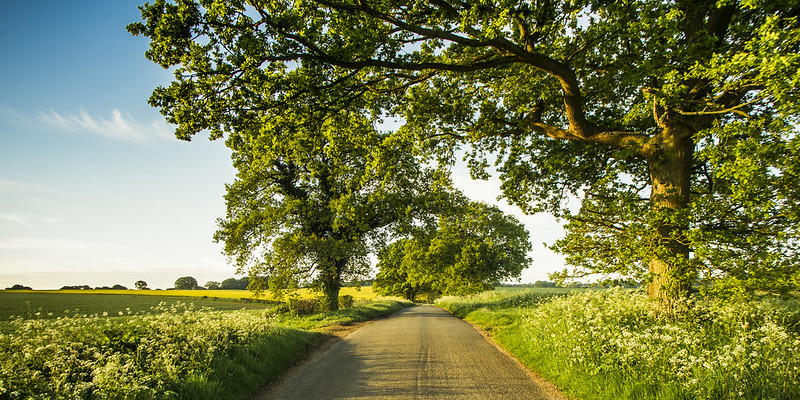 The promised brightness and colour had appeared, but sadly, the long, hot days didn’t follow! Of course, there was sunshine, there were hot days; but summer did not really seem to make much of an impression. There were rather too many windy days, and a few too many grey days for there to be any chance of indolence! When I took this shot for July’s entry to the group, it wasn’t so much a season I seemed to be portraying, but rather, a feeling of timelessness…. 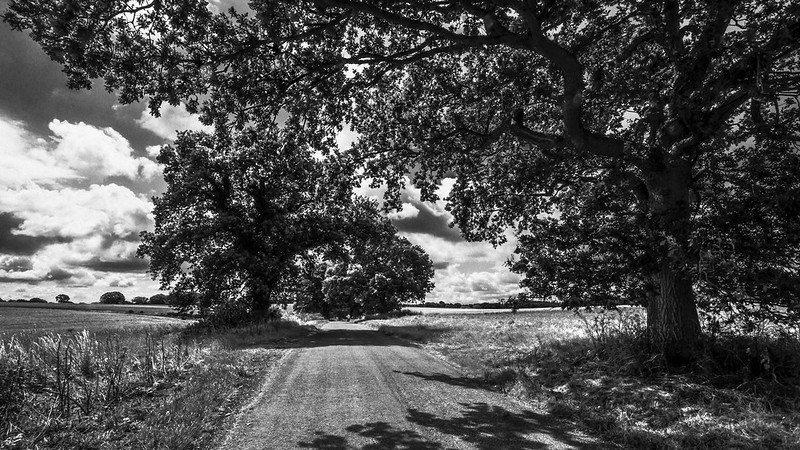 Taken a little later in the morning than my usual shots, this one has the sun higher in the sky, so there are interesting tree shadows on the road. It struck me as I was processing the photo that this road probably hasn’t changed much in years. These trees will have grown, but they probably replace older trees that have long since gone. The crops may have changed a bit (not so much oilseed rape a few decades or centuries ago!), but I imagine that the land is essentially the same as it’s been for a few generations. These thoughts inspired me to go black and white that month.

October’s photograph gave me the perfect autumn image! The weather had continued to be grey and non-descript, but then, a few days before my “12 Images …” deadline for that month, I stepped outside to a perfect, misty Autumnal sunrise. In a week of wet, wet, wet weather, the morning light was ethereal, a golden mist all around as I drove to work… 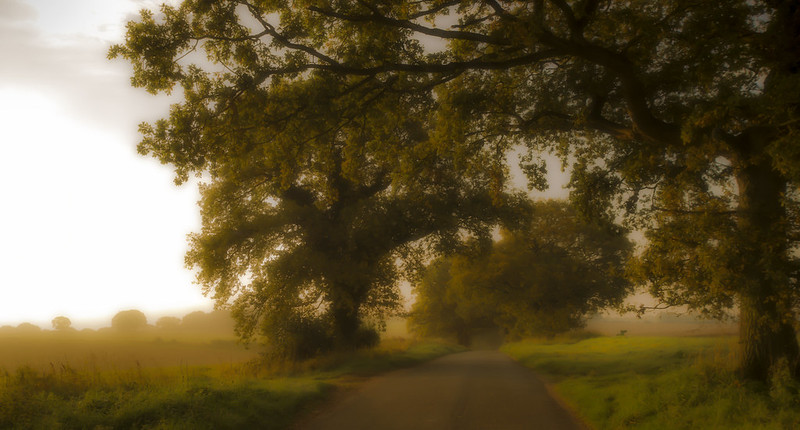 On the day that I took my November photograph, the one you saw at the head of this post, we had the first frost of this winter. It was a really gorgeous morning, and well worth getting cold for … it was the first time this winter that I’d had to scrape the ice from my car, and part of me thought I must be a bit mad to be leaving for work so much earlier that I needed to, just because I didn’t want to miss the sunrise! It was worth it!

And so winter was well and truly with us again, and the end of this extremely enjoyable photographic project was in sight. One last shot to go! It got to the week of the deadline, my last week at work before the Christmas break, but I just didn’t get the opportunity to take a shot when I was on my way to work at all – I was either way too busy with the pre-Christmas workload for such dalliances, or it was raining, or it was dark!! However, when I got up one morning just before the year’s end, I opened the curtains to see a beautiful red sunrise, and knew that, at last, I could get my final shot of the year …. 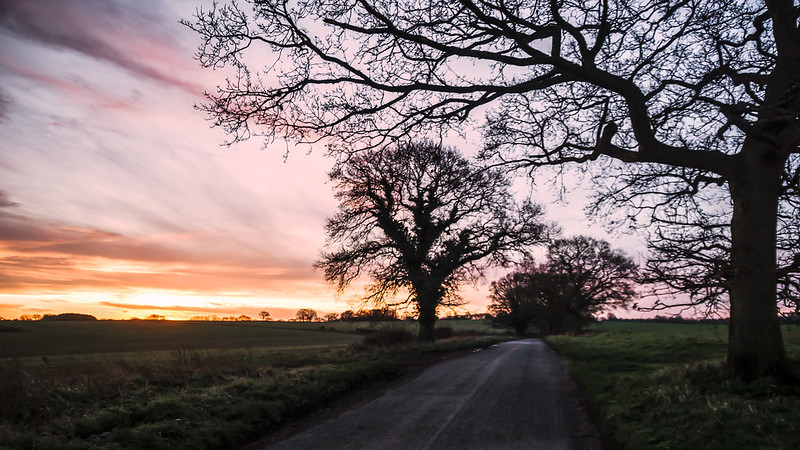 And now, this week, I’ve just taken Image #1 of 2016’s set! Yet another one of the roads I can drive along to get to work! If you’d like to see all 12 months’ worth of shots from last year, along with this year’s efforts, you can look at my Flickr album here.

3 thoughts on “A Road Through the Seasons”